Watch LIVE: William Shatner & crew blast to the edge of space and back to Earth 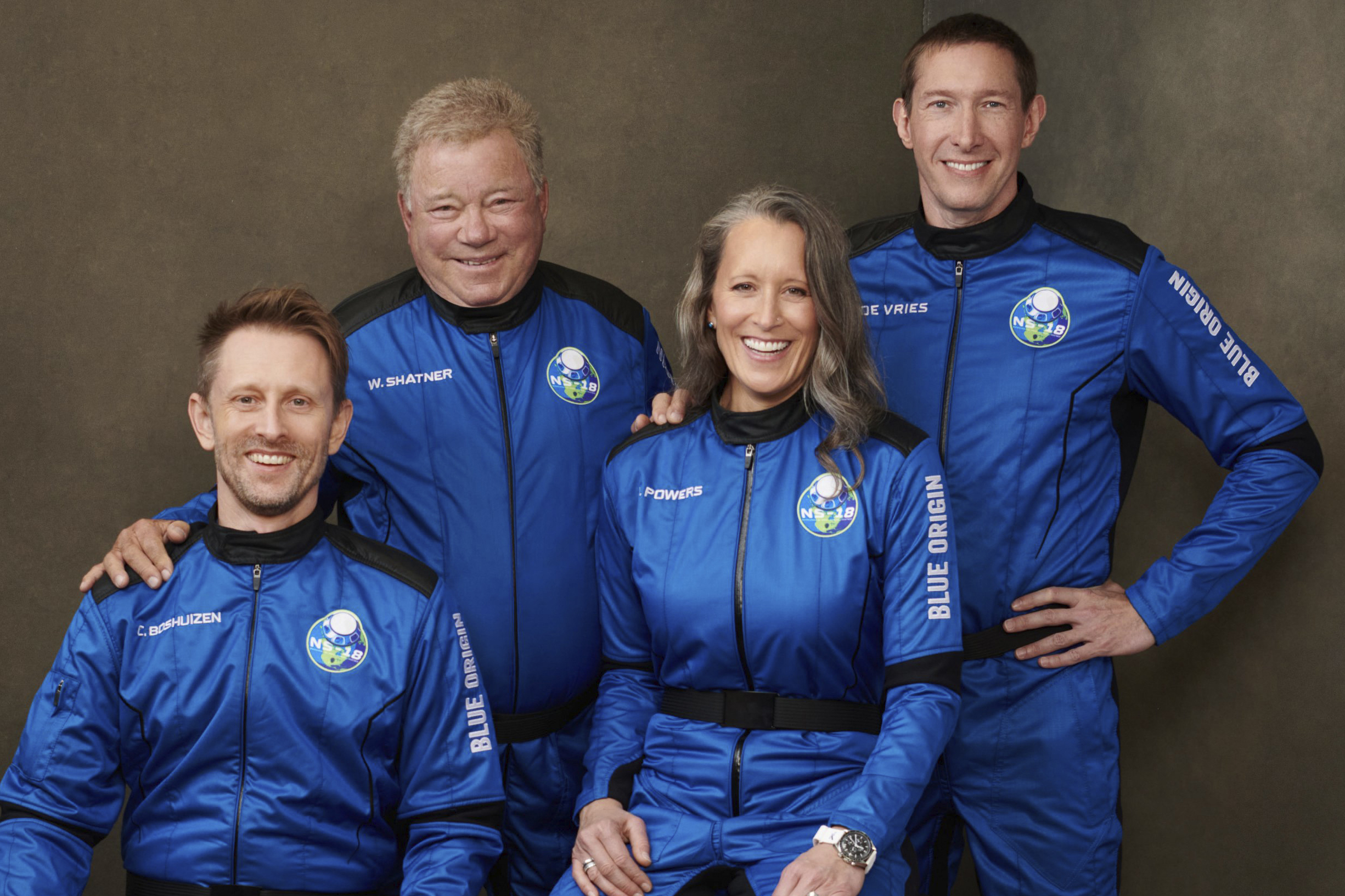 Watch LIVE: William Shatner & crew blast to the edge of space and back to Earth

UPDATE: The New Shepard launched at approximately 8:50 a.m., carrying “Star Trek” hero William Shatner and his crewmates to the edge of space in a convergence of science fiction and science reality.

The fully automatic spacecraft reached an estimated altitude of 66 miles over the west Texas desert. The spaceflight was about 11 minutes in total, with approximately three to four minutes of microgravity for the group before they descended and touched back down on Earth safely at 11 a.m.

Bezos joined friends and family as they greeted the astronauts exiting the capsule and stepping foot onto the Texas soil; he sprayed bottles of champagne to celebrate the safe and historic launch.

“Welcome to a very small club,” Bezos told the four new astronauts as he fastened pins on their suits.

“Oops, this one is bent,” Bezos said as he tried to pin one on Shatner. “So am I,” Shatner joked back.

“Everybody in the world needs to do this,” Shatner, who was overcome with emotion, told Bezos. “It was so moving. This experience has been something unbelievable. The blue down there, the black up there.”

“You have done something,” Shatner said to Bezos. “What you have given me is the most profound experience. I am so filled with emotion. I hope that I can maintain what I feel now, I don’t want to lose it.”

“I am overwhelmed,” he added. As for the camaraderie with the crew, the actor said, “It’s like being in battle together.”

This was the second successful crewed flight for Blue Origin from their launch site in Van Horn.

Best known for his role as Captain Kirk, the 90-year-old Shatner joined three other passengers for the launch, currently expected to occur about 8:50 a.m. MT from Van Horn in Culberson County.

Bezos’ space travel company, Blue Origin, invited Shatner on the brief jaunt to the fringes of the final frontier, which will make him the oldest person in space.

It will be Blue Origin’s second passenger flight, using the same capsule and rocket that Bezos used for his own launch three months ago. The trip should last just 10 minutes, with the fully automated capsule reaching a maximum altitude of about 66 miles (106 kilometers) before parachuting back into the desert.

As Shatner and the other passengers awaited the launch, they received a special message from Blue Origin’s first crew, including 82-year-old Wally Funk.

“I hope this flight will be the most fantastic experience of your life as it was mine,” Funk said. “Take time to enjoy every aspect of this journey from liftoff to touchdown.”

And last week, the Russians sent an actor and film director to the International Space Station for movie-making.

“We’re just at the beginning, but how miraculous that beginning is. How extraordinary it is to be part of that beginning,” Shatner said on the eve of his flight. “It looks like there’s a great deal of curiosity about this fictional character, Captain Kirk, going into space. So let’s go along with it and enjoy the ride.”

Rounding out the crew: a Blue Origin vice president and two entrepreneurs who bid unsuccessfully for a seat on the previous flight with Bezos, the founder of Amazon. Blue Origin did not divulge their ticket prices.

Bezos was at the expansive launch and landing site near Van Horn to see the four off.

Bezos greeted each astronaut individually with hugs and well-wishes as they boarded the capsule. Shatner appeared all-smiles as the team made the final preparations for launch.

Astronauts were not wearing helmets to enhance the “human experience,” a Blue Origin official said.

The post Watch LIVE: William Shatner & crew blast to the edge of space and back to Earth appeared first on KVIA.