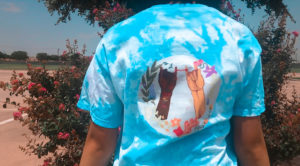 While the country debates the merits of the Black Lives Matter movement and LGBTQ rights, Gen Z teens are building a future that they say will be free of police brutality, climate change deniers, and all forms of bigotry. That’s one takeaway from a recent online meeting with three Arlington high school sophomores.

The young entrepreneurs — Paul Carmona, Aidan Nguyen, and Vivian Nguyen (not related) — saw the recent national emergence of protests against racial injustice as the perfect charitable cause for their socially conscious apparel line: Dyenosaur Apparel.

“Dyenosaur Apparel was founded on giving back to the community,” Vivian said. “Cultivating and fostering a community of diversity and inclusion is important to us. Because we have a platform, we have taken it as our responsibility to utilize it in the best way by combatting certain social issues, racial injustice, and [mistreatment] toward queer youth. We think that it is important to advocate for diversity.”

Vivian, 15, who founded the volunteer-run company last year, recently tasked lead designer Carmona and other volunteer students with creating a new line of shirts and stickers in support of the Black Lives Matter movement and the LGBTQ community. Half of the proceeds from sales will benefit organizations that support or advocate for social justice issues, the teens said.

“Vivian came to us and said she needed something that reflected” LGBT- and Black Lives Matter-related images, Carmona said. “She wanted something vocal but just in an image. Our team members worked separately. Each design was special to us. Some were graceful and pretty. Others were more symbolic and represented injustice and how we need more connection and peace.”

One T-shirt features blue tie-dye. At the center of the chest area is a Black hand near a white hand. A thin red string connects the hands’ raised pinkies. As part of Dyenosaur’s BLM + LGBTQ Charity Campaign, original stickers are also available for sale.

Notions like racial equality and criminal justice reform come naturally to the 15-year-olds.

Civilizations have always been swayed by forces of adaptation and evolution, Aidan said. When the teens came of age, they say they were “integrated into a more progressive society,” referring to paradigm shifts in social consciousness that followed the abolition of slavery in the 19th century and the establishment of voting rights one generation ago, among other progressive reforms. “As the younger generation, what we want is to advocate and spread awareness that we can change the norm. We will grow up. We will be the people in power in government, business, and the media. We will be able to integrate progressive beliefs into society. Then, the younger generations will again pick up the torch and do that over and over and over.”

What is holding back progress, he added, is apathy about systemic problems like racism, wealth inequality, and discrimination against the gay and trans community.

COVID-19, he continued, has been a setback for Gen Z efforts to support the Black Lives Matter movement. The apparel and messaging that the entrepreneurs were hoping would be adorning crowded high school halls and streets has been, for the time being, relegated to online posts and Instagram stories. Still, social media is a strength, the teens said.

“Social media can be used to curate an Instagram page,” Vivian said. “I can engage an audience to influence change in a positive way, too. For Dyenosaur Apparel, we took an activism approach. That is something that we are really proud of. We hope to integrate it more into our future collections.”

When asked how running a business has shaped their college and career plans, Vivian, whose parents are immigrants, said owning a business wasn’t something she thought could be a reality.

“After starting Dyenosaur Apparel, I realized how much I fell in love with the entrepreneurship and creative aspects of this,” she said. “I am keeping my options open [as far as future career plans go]. I am hoping to keep pursuing this to see where it takes me.”

Aidan has a wide range of creative interests but is focusing on engineering and computer science. The charitable aspect of Dyenosaur Apparel has taught him that businesses can have a positive impact on society at large. He would like to build off his experience as the marketing director for the homegrown apparel store by one day starting a tech company that addresses climate change. Carmona is bullish on the company’s growth potential, which he said could “take over the world.”

“We wanted to share a message that we are with these people,” he said, referring to marginalized communities across the country. “We are going to stand against any sort of social injustice. Every type of sexuality, race, or people who suffer — we will always be there to help them.”